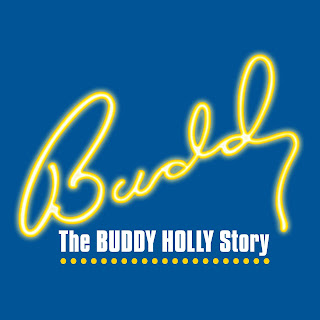 Well, the theatre is an unpredictable animal and sometimes things change on a dime!  Just as I was announcing my participation in "Bless You All!" with Unsung Musicals Co., I received an offer to come in as a last minute replacement in the role of 'Hi-Pockets' Duncan in "Buddy: The Buddy Holly Story."  This will be a joint production between Gateway Playhouse in Bellport, NY and Ogunquit Playhouse in Maine, and will be directed by DJ Salisbury.

'Hi-Pockets' was Buddy Holly's first manager, a Texas D.J. who discovered Buddy and helped him find his first record deal with Decca.  "Buddy" is one of the most successful shows in West End theatre history and has proven enormously popular in the U.S.  It was so successful at Ogunquit the last time it was presented there, this will be an encore engagement.  I am delighted to return to Ogunquit, having starred in the exceptionally wonderful "La Cage Aux Folles" there in 2007 for the theatre's Diamond Jubilee.

I will post news and reviews from "Buddy"over the next couple months!  As of this writing, I have three days to pack up my luggage, tra la la, and get ready to dive into a new part.  That's show biz.
Posted by Jamie at 10:11 AM No comments:

Bootleg Shakespeare a Triumph! Next up: an Unsung Musical! 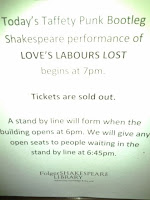 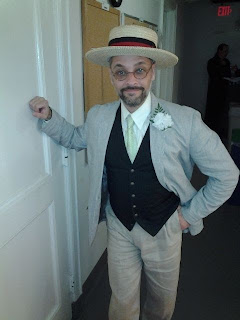 On August 5th, an SRO audience crowded into the Folger Theatre to experience the electricity and power of this year's Bootleg Shakespeare presented by Taffety Punk Theatre Company.  "Love's Labours Lost" began rehearsal that morning at 10AM.  The dedicated and impeccably prepared actors came together in a spirit of creativity (and alacrity) and by 7PM the show was sketched in just enough for the off the cuff performance to take wing.  And take wing, it did, bursting with life and joy and eliciting laughter and excitement in the audience.

I played the French Princess's right hand man, Boyet, as a rumpled, wise and dapper gent who still has a yen for the ladies.  It was bliss working with these great talents again, and I am proud to say this was my fifth in the Bootleg Series.  For more on Taffety Punk and the amazing work they are doing in DC,  click here.

I was delighted to have been asked to join the company of a revival of a forgotten musical revue from 1950 called "Bless You All!".  Ben West, the producer and director of Unsung Musicals Co., has resurrected this lost gem, penned by Harold Rome and Arnold Auerbach.  I will be playing one of the two 'Top Bananas,' sketch comedians in the tradition of Phil Silvers and Sid Caesar.  The production will play the Connelly Theatre in NYC September 19 through October 5.  For more on Unsung Musicals and to purchase tickets for "Bless You All!" click here.

The cabaret act I directed, "Everything Old is New Again," starring the vivacious singer Lianne Marie Dobbs, was asked back to the Metropolitan Room for an encore performance in July.  The show has garnered fantastic reviews and Lianne is now at work on a CD of songs from the act.  Please visit Lianne's website for future dates, reviews, video and to find out how to purchase her CD!


One last bit of news to share: I am building my work as a teacher and acting coach here in the city, and I am pleased to say that I will be working with a new website called CoachMeNYC, which will be a clearing house for performing arts coaches of all kinds.  I am looking forward to the site going public shortly, and to working with talented actors and singers on everything from college auditions to solo performance.  Keep an eye on this space for more on this new venture, and follow me on Facebook and Twitter.