"MAME" CLOSES ON JULY 8 AFTER A STELLAR RUN AT GOODSPEED!

NEXT UP:  JAMES BEAMAN PLAYS THE GHOST AND THE LEAD PLAYER IN "HAMLET, THE BAD QUARTO" WITH TAFFETY PUNK THEATRE COMPANY AT THE FOLGER THEATRE, AUGUST 6 IN DC! 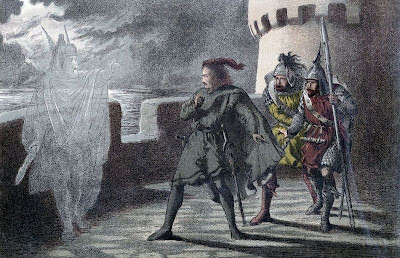 Those of you who know my work know that my first and most enduring love is the classical theatre and acting Shakespeare.  I had the honor and privilege of training in classical acting at The Shakespeare Theatre Company Academy for Classical Acting at George Washington University, and since then I have had the chance to do some exciting roles and powerful Shakespeare productions.

I am especially proud of my work with Taffety Punk Theatre Company, an exciting cutting edge theatre in Washington, DC, founded by fellow ACA alumnus Marcus Kyd and his multi-talented partner, Lise Bruneau.  For several years now, one of the most popular of their projects has been the Bootleg Shakespeare series, in which members of the Taffety Punk company and guest actors from around the country arrive at the Folger Theatre on the morning of the single performance of a Shakespeare play, having memorized their lines.  The day is spent doing rudimentary staging, fight choreography and dances, and at show time, with the actors never having run through any of the play, a  an audience packs the house, free of charge, and the actors catapult themselves into a breathtaking, impromptu performance.  I have had the pleasure of performing Posthumus in Cymbeline, Hubert in King John, Theseus in The Two Noble Kinsmen and this year I will perform the roles of the Ghost of Hamlet's Father and the Lead Player in Hamlet: The Bad Quarto. 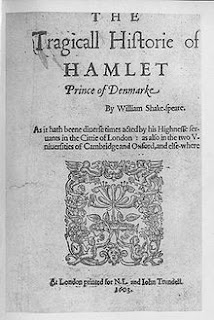 The Bad Quarto, as it is termed by scholars, is the first published version of Hamlet which appeared in 1603.  Since the First Folio of 1623 is considered the authoritative text for the canon of Shakespeare's plays, and the Bad Quarto of Hamlet differs significantly from the Folio text (character names are different, there are significant differences in the text etc.), it is thought to be a possibly pirated version of the play, taken down haphazardly by someone during live performances, or possibly drawn from early actor 'sides' from a beginning stage of the play's development.  At any rate, it's a fascinating and sometimes bizarre look at the most famous play in the English language.  Taffety Punk, drawing its inspiration from a devotion to classic texts combined with a punk rock sensibility, is the perfect company to present this odd and interesting artifact, and the Bootleg Shakespeare project will give it even more vital life and energy.

I am looking forward to enjoying the interesting task of being both the Ghost of Hamlet's Father and the Lead Player who represents the murdered Hamlet Senior in the play-within-the-play.  I think the dual role might be very interesting and effective for the audience.

As of now, this one night only event is the only project on the docket for me beyond MAME at Goodspeed.  Ah, the uncertainty of the actor's life!  Check this blog for updates and announcements of the next creative adventure.  Meantime, for more information on the amazing work of Taffety Punk and details on Hamlet, visit their website here.

Let's Start at the Very Beginning...

"MAME"  CONTINUES ITS RUN AT GOODSPEED WITH AN EXTENSION WEEK!  NOW THROUGH JULY 7!


An exciting thing happened this week:  I got to meet one of my idols.  Goodspeed Musicals has commissioned a musical adaptation of a charming children's book by Julie Andrews and her daughter, Emma Walton Hamilton, "The Great American Mousical."  The new show is slated to have its first production at the Norma Terris Theatre in Chester this fall.  It is a valentine to Broadway and a wondrous tale about a company of mice putting on a show in a crumbling old theatre that is about to be demolished.

This week, a group of us actors from the "Mame" cast were asked to do a first reading of the script (written by Hunter Bell), which is still very much in development, along with the composer and lyricist, Zina Goldrich and Marcy Heisler, who performed the still unfinished (and marvelous) score. 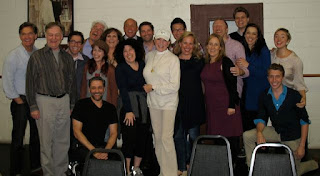 The kicker was that the reading would be done for a small group of Goodspeed artistic staff, the show's musical director, the casting director, and YES!-- the director of the show, Julie Andrews herself.  I don't think I need emphasize how incredible it was to meet Julie Andrews, nor to gush about the influence she has had on my life and my love of theatre and film.  She is --and this expression is used far too often-- a living legend.  And she is everything one would expect-- gracious, eloquent, a lovely lady.  I managed to shake hands with her and her very kind daughter and co-author, Emma, and beg a photo with them. What a moment!! 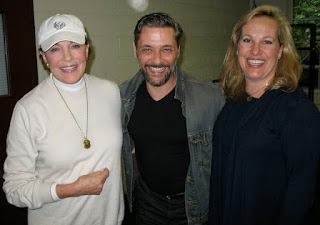 As for "The Great American Mousical,"  I have no doubt that it will be a magical show.  The material, in these very early days, is already beguiling, clever and full of heart.  And Goodspeed is decidedly excited about this, as this is the first musical they have ever commissioned to be created from the ground up here.  It has enormous promise and I was delighted to be a part of the reading and to get a first glimpse of it.  Look for it this fall at the Norma Terris Theatre in Chester.

As for me, nothing has yet materialized as a next project beyond "Mame" but I am looking forward to having some summer vacation following our run here-- a nice break to enjoy family, sun, sand and relaxation before charging 'once more unto the breach' in this mad business of show.
Posted by Jamie at 12:28 PM No comments: