My Year of Goodspeed

"Lloyd always said in the theatre a lifetime was a season, and a season a lifetime..."
~"All About Eve"

As actors we all have our wish lists: lists of roles we want to play, lists of directors and prominent actors we'd love to work with, and then there's the list of theatres where we would love to tread the boards. It is part of an actor's ambition; ever reaching for better and better opportunities--desiring this man's art, and that man's scope, as it were. My career is increasingly split between my passion for classical acting and my love of musical theatre, and in each genre we have in the US our leading institutions. On the musical side, Goodspeed ranks at the top. To be asked to perform here twice in one season was a rare opportunity and it has been such a rewarding journey for me.

Eight months of near continuous work has afforded me the opportunity to work with two new directors, two new choreographers; it has put me in the mix with some of our finest Broadway performers, both seasoned veterans and rising young stars. Goodspeed's reverence for the classics they revive and their unflinching determination to present fresh and refined visions of those classics have give me the chance to experience the magic of Irving Berlin and Frank Loesser in two of their finest creations. 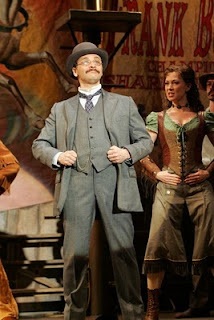 I was able to create my own take on a delicious character in Charlie Davenport, and then to join an amazing ensemble of triple threat performers in "How To Succeed...", rediscovering my love of dance and enjoying the process of creating the wacky 1960's world of that show. Throughout these many weeks of work I have also had the chance to get to know this beautiful part of Connecticut, to revel in the changing seasons, to taste of the art and fine food and history that make this area so unique. In short, my year at Goodspeed has enhanced my life and my career, and to be almost continuously employed in my craft during these challenging economic times is a gift that I am truly grateful for. 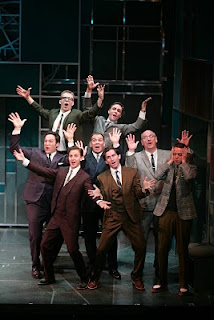 My deepest thanks to Michael Price, the fearless leader of Goodspeed, and to his entire producing team, the artistic staff, stage management team, and dedicated crew, and people both behind the scenes and in the front of house whom I have had the pleasure to get to know this season. I feel a part of your family.

Today we play our last performances of "How To Succeed..." and then the diaspora begins. Most of us will pack up and head back to New York City; a lucky few of us are slated to begin rehearsals for new Broadway shows; most of us will get back into the hustle of auditions, taking a stab at the next gig before settling in for the holidays. Tomorrow when I return to the city I have two auditions! No time to rest on my Goodspeed laurels--the next thing awaits. I will be back in East Haddam next weekend to lead the first ever Goodspeed Audition Intensive, introducing a new generation of young talents to the process that will become one of the fundamental components of their life in theatre. I discovered, or perhaps decided, at one point in my career that we must love ALL of what we do, the auditions as well as the performing, for truly they are all a part of the thrill ride that is an actor's career.
Posted by Jamie at 9:01 AM No comments: 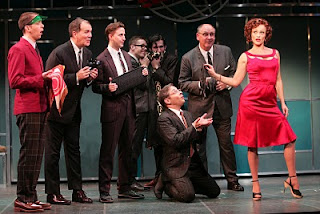 TWO MORE WEEKS OF "HOW TO SUCCEED..." AT GOODSPEED!

This production may prompt audience curiosity about how well the planned Daniel Radcliffe-John Laroquette version will do on Broadway in early 2011. It may be hard to top how well all of the separate components of the Goodspeed production flow satisfyingly together. ~Hartford Arts Examiner

The joys of live performance are sometimes contradictory. Stage actors are, by nature, creatures of habit; we love the athletic repetition of our performances, and the attendant routines of signing in, warming up, donning our disguises--the reassuring daily motions of the working performer. However, one of the realities of theatre is that it is in many ways spontaneous, and indeed, works best when there is sense of danger, of unpredictability. And, no matter how strong an actor's technique or his level of concentration on stage, sometimes something happens to just, well, crack him up. The Brits call this "corpsing" because in the moment those inappropriate giggles arise, one's character dies and the actor beneath is exposed. Last week, regrettably, a mass expiration occurred on the Goodspeed stage, during the rousing 11th hour number, "The Brotherhood of Man." It all began so simply--a small slip of the tongue by our esteemed "president", Ronn Carroll as J. B. Biggley. Brian Sears, as Finch, setting up the number, says, "We're all brothers." Ronn is supposed to glare at Bud Frump and say, "Some of us are uncles." On this night, he mistakenly said, "Some of us are nephews." I know it seems so innocent, so banal, but it took Brian and the rest of us by surprise; by the time Brian had to turn and sing to the group of us executives, a red faced grin had erupted on his face. The rest was a chain reaction--shoulders began to shake, serious expressions gave way to struggling grimaces unsuccessfully masking open hilarity. The first part of the song was broken up by a bunch of performers trying to regain their composure while a mystified and bemused audience watched. Torture!! And of course we were all heartily ashamed of ourselves while acknowledging that it was indeed quite funny and we are human, after all. The next night, when we returned to the same spot in the show, I know more than one of us was gripping his feet, holding his breath until the moment passed without a giggle.

Thanksgiving approaches, as does the conclusion of our run. Dusk falls early now; the nights are cold and dark. Pumpkins and mums are giving way to yule logs and twinkle lights. I watched all the seasons change here at Goodspeed this year: I arrived to start "Annie Get Your Gun" in the frigid cold of March and capered through the Wild West through spring and summer, then returned during the last dog days of that season to take up my position at World Wide Wickets through a blazing New England fall. With the coming of the holidays, I can only feel gratitude that in these uncertain times, I have been gainfully employed as an actor at one of our finest theatres for virtually an entire theatrical season. What a gift. I plan to savor these last performances, even as my eyes turn inevitably to the horizon and the search for that next gig.
Posted by Jamie at 6:55 PM No comments: 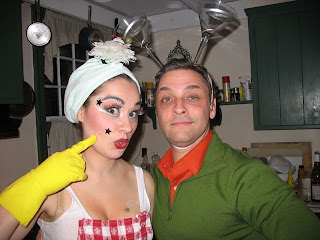 Actors love in-jokes. I think this stems from the joy that we all experience when we are asked to join a temporary family within a production; our little catch phrases and private gags make it feel like a special club of which we are honored members. I also think that the in-jokes are a way of lightening the pressure of the eight show week. We took full advantage of a chance to blow off steam with our company Halloween party this past weekend. The theme of the party was to dress as a line of dialogue from "How To Succeed...". With limited budgets and creative imaginations, we all hit the outlet malls, Wal-Mart, and party stores to find the bits and pieces that would get across, in the wittiest possible way, the line we had chosen to represent. The results were hilarious: everything from a hula girl with leprosy ("an extremely tropical disease"), to a church lady covered in plastic ivy ("Grand Old Ivy"), to my own contribution--a head dress made from two martini glasses, one of them containing a prop olive ("You call this a double martini? It only has one olive in it!"). Here I am wearing my creation, next to cast mate Lianne, who came as "Making a clean breast of the whole thing" (she carried around a Comet can with a revised label on it that read "Boob"). The party was a blast--pot luck goodies, a fire pit and S'more making, jack 'o' lanterns, and much autumnal frolic. This is such a bright and funny group of people. The last month of shows will continue to be great fun.

Goodspeed has also offered me the opportunity to hone my skills as a teacher and coach, through their education outreach programming. I have greatly enjoyed leading workshops with area middle school and high school kids, and have been especially impressed with the talent and motivation of the students from the Community Music School in Essex.

I love coaching young talents; they are eager sponges that absorb everything I throw at them, and their enthusiasm is a reminder of the fresh faced drive that led me to a life in this profession. I am delighted that Goodspeed has collaborated with me and my teaching partner, triple-threat performer Molly Tynes, to create their first ever Audition Intensive for graduating high school seniors preparing to audition for college theatre programs and performing arts conservatories. This exciting weekend seminar will take place December 4 & 5, and Molly and I will be teaching the nuts and bolts of the audition process, and coaching the students on their songs and monologues in preparation for their college tryouts. We will also be joined by a distinguished panel including Brent Wagner, chair of the musical theatre department at University of Michigan, Michael O'Flaherty, musical director of Goodspeed Musicals, and choreographer and master teacher Parker Esse. This panel will view the students' mock auditions and give invaluable feedback. It is truly a remarkable opportunity for young actors, and an exciting project for me and my fellow educators. Visit the Goodspeed Musicals website for more information.
Posted by Jamie at 11:29 AM No comments: