In recent years, playwrights have gotten very clever at adapting classic stories to be performed by a small handful of performers on a malleable set, with a minimum of stagecraft—relying on the imaginations of the actors and their director to create the world of the story and the people that inhabit it.  This is the essence of storytelling, of course, and the essence of theatre that Shakespeare and his troupe embodied on the bare outdoor stages of Elizabethan England:

Piece out our imperfections with your thoughts;

Pieces like The 39 Steps, Around the World in Eighty Days and the like bring adventure, suspense and tour de force acting challenges to the stage, and Ken Ludwig, one of our masters of comedy, has created his own take on a classic for five actors.  Sir Arthur Conan Doyle’s iconic “The Hound of the Baskervilles” is perhaps the best known of the beloved Sherlock Holmes mysteries—a bizarre tale of ghoulish legends, spooky moors, and a shape shifting villain who keeps the great detective and his sidekick Dr. Watson ever guessing as they seek to solve the case of the spectral hound.  It’s a story that has been adapted dozens of times on film and television with great actors like Basil Rathbone, Jeremy Brett and Peter Cushing playing the eccentric sleuth Holmes.

In Ludwig’s Baskerville, three actors portray all the colorful characters that flit in and out of Holmes’ and Watson’s orbit, from familiar constants like Mrs. Hudson and Inspector Lestrade, to the cockney urchins, train conductors, cab drivers, and merchants of Victorian London, to the sinister rogue’s gallery of vivid personalities that inhabit the moors of Devonshire.  As Actor One, I have 14 of these folks to create, using all the vocal and physical tools in my arsenal to transform, sometimes before the audience’s eyes, and what a treat for an actor!

As always, I turn to the great character actors, and even cartoon characters, of the past for inspiration in crafting my roles.  With so many distinct personas to create--sometimes with lightning fast speed--finding a voice and a physical shape, and walk, and gestures is the challenge and stealing from the best is fair game in my book!


For example, among my list of characters is the bookish and erudite Dr. Mortimer, who consults Holmes and Watson and introduces the central mystery in Baskerville.  For him, I've used that professorial cartoon dog, Mr. Peabody, as my model.  For Stapleton, the story's villain, who is masquerading as a harmless butterfly collector, I'm doing a straight up impression of the great Terry-Thomas, best known for such films as "It's a Mad, Mad, Mad, Mad World."  His exaggerated British accent and gangly 'hail-fellow-well-met' eccentricity work well for Stapleton and I think will get laughs.  Other cameos I have to perform are the randy Lucy, the wife of message office proprietor Mr. Wilson--for her I am stealing the wry affectation of Maggie Smith (particularly in "Evil Under the Sun"); for the old country farmer who offers a warning on the moors, I am borrowing from Old West character man Gabby Hayes, who was famous for whistling out lines like, "There's gold in them thar hills!" 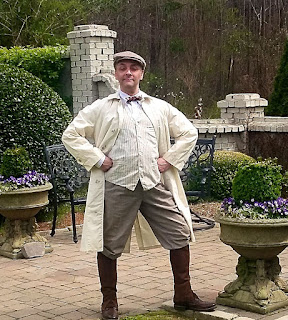 Obviously, Baskerville is a feast of fun for a ham character actor, and I am so enjoying being part of this ensemble and working with our ingenious director, Sam French.  The show explodes onto the splendid Cape Fear Regional Theatre stage April 6 and runs through the 23rd!  Shakespeare's birthday, in fact.  Seems significant, my dear Watson!
Posted by Jamie at 3:09 PM No comments: