"ANYTHING GOES" CONTINUES ITS SOLD OUT RUN AT MERRY-GO-ROUND PLAYHOUSE THROUGH JUNE 22ND! 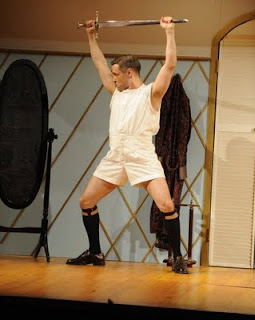 The leads highlight the playhouse stage with astonishing charisma, comic timing and vocal talent...Beaman hits his own comedic stride as the cliche-confused Englishman with a deeply buried wild side. ~AuburnPub.com


Wrapping things up here at Merry-Go-Round Playhouse, where our hit production of "Anything Goes" will close on June 22nd. It has been such a pleasure to work here and I look forward to coming back in future seasons! I look to the horizon now and to my next creative endeavors, which include "Victor/Victoria" at Stages St. Louis, and an exciting return to Shakespeare and the great theatre town of Washington, D.C. in a play that started my journey as a classical actor.

The year was 1978, and my Dad was working in the theatre department at Boston University. The graduating class was going to perform Shakespeare's "King John" and the director, who was also the head of the acting program, wanted a young boy to play the pivotal role of Prince Arthur. I was already a pretty precocious little actor, and I auditioned along with a few other faculty brats and won the part. To this day, I can remember everything about the process of rehearsing and performing that play. It was a dream come true to a 12 year old who had already decided he would be the next Laurence Olivier. Arthur is the best of Shakespeare's roles for a child actor and he plays several very dramatic scenes, one in which he manages to talk his jailer, Hubert, out of putting his eyes out with hot irons at the behest of the King; and there is a gripping death scene, in which Arthur leaps from a tall wall and perishes in his attempt. I can say without hesitation that playing Arthur on the Boston University Theatre stage was the catalyst for a passion for fine acting and for Shakespeare that has carried me through the last 30-plus years in my work as an actor.

This summer, I will return to "King John" as Arthur's would-be assassin, Hubert de Burgh, in the next of Taffety Punk Theatre Company's Bootleg Shakespeare productions to be performed at DC's Folger Theatre. I have written before about the great work my friends Marcus Kyd and Lise Bruneau have been doing with their company, and I related the story of the Bootleg series, but for those who don't know... Bootleg Shakespeare is a one day theatrical event. Weeks in advance, director Lise Bruneau assigns roles in the selected play to both company members and actors in the extended Taffety Punk family; the actors do their text work and memorize their lines, and then show up the morning of the scheduled performance for a day of rehearsal, which really is comprised of rudimentary staging and the sorting out of entrances, exits, a few props and bits of business, including any fight sequences or dances. Then the play is presented free of charge to a packed audience. It is a spontaneous and thrilling experience for everyone and a true test of the actor's ability to jump right in and make it work! I have done two of these and am delighted to be asked back to do another.

Hubert is a great character. Based on an historic figure, legend has it that Hubert was covertly enlisted by the usurping King John to eliminate the true heir to the throne, the young Prince Arthur. 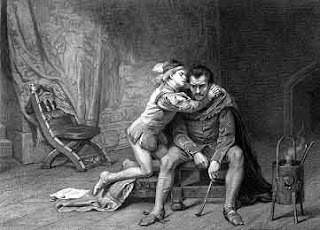 In Shakespeare's play, while acting as the young boy's jailor, Hubert becomes attached to the child and when the time comes for him to carry out the execution, he finds he can't go through with it and spares Arthur's life. He lies to the King, putting him off with news that Arthur is dead until he can find a way to free the prince and return him to his mother and the King of France, who are at war with John. Tragically, Arthur takes it on himself to try and escape and dies in his attempt, and the devastated Hubert joins the fight to bring down the usurping King John. A wonderful journey for an actor--to go from hardened mercenary to noble hero in the course of the play. I look forward to savoring every moment of my one night run!
Posted by Jamie at 6:03 PM No comments:

The Gypsy in Me 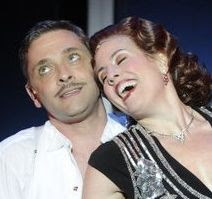 JAMES BEAMAN CONTINUES AS LORD EVELYN OAKLEIGH IN "ANYTHING GOES" AT MERRY-GO-ROUND PLAYHOUSE THROUGH JUNE 22!


‎Lord Evelyn is one of those thankless roles, the stuffed-shirt Englishman, but Beaman gradually soars with it to comic heights, eventually tearing his shirt open and doing a Douglas Fairbanks set of leaps, waving a big sword and singing "The Gypsy in Me." ~SYRACUSE.COM 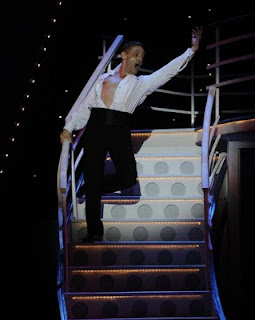 I am not certain I agree with this reviewer that Evelyn is a thankless role, but I will say that the part presents some seductive traps for the actor. It would be all too easy to put on a funny accent and a bunch of tics and mannerisms and call it a day with this thinly written caricature of an Englishman. Adam Godley, in his Tony-nominated turn in the role in the current Broadway revival, circumvents this by giving a somewhat understated performance, by being actually British, and by being so funny looking (tall, gangly, with a long face and outrageously large ears). In my case, I saw Evelyn as being as iconic a figure in this classic show as the brassy Reno, or the gangster Moonface Martin in his signature disguise as a Christian missionary, so I knew he had to fit in with the writers' conception of a foppish Englishman. But the challenge to me was to make the character attractive enough and lovable enough that the audience would accept that he winds up with Reno, the leading lady of the piece.

My first instinct was to drawn upon the qualities of British actors who I saw as personifying the type of English archetype Lord Evelyn represents. First actor who came to mind was the great Terry-Thomas, whose gap-toothed grin and over-articulated speech made him one of the most popular comedic actors of the '50s and '60s. 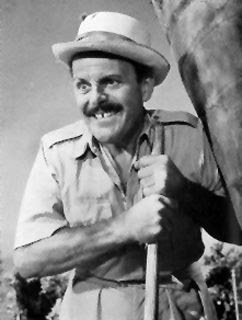 This was a good starting place, but even though Terry-Thomas made a career out of being a womanzing 'bounder' I still wanted to evoke a slightly more refined quality. For this I looked to ultra suave and elegant English actor Ronald Colman, whose thin mustache and gentle ways gave him a profound dignity in films like "The Prisoner of Zenda" and "A Double Life." Toying with these two icons as inspiration, I found a way to give Evelyn the guffawing laugh and absurd upper crust accent, but also provide him with a refinement befitting his station and an understated sex appeal that would get Reno's attention. 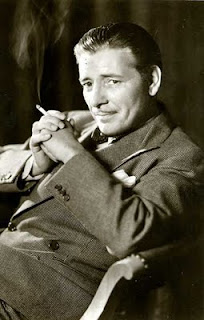 My last film icon inspiration informed Evelyn's private fantasies of who he'd prefer to be--the swashbuckling rake Douglas Fairbanks, Jr. I had two opportunities to expose Evelyn's secret yearning to be a man of panache--one is the scene where Evelyn is alone in his underwear in his stateroom fencing with himself in the mirror; the other is his big Act Two number, "The Gypsy in Me," where he lets his hair down and finally declares his passion for Reno. By incorporating all these inspirations, I was able, I hope, to make Evelyn more than a stock character, a man of propriety who secretly wants to be a part of the modern world of jazz and fun that was the early 1930s. The other notable quality I drew from the script was the fact that, unlike any of the other characters in the story, Evelyn has no agenda. He is guileless and rather innocent, while Billy employs tricks and deceptions to steal Hope away for himself, while Reno schemes with Moonface to break up the engagement, and while Hope herself carries on a secret amour with Billy as her mother manipulates her into a loveless marriage with the wealthy but hapless Evelyn. I think that the sweet innocence I bring to Evelyn gives the audience one more reason to fall for him.

"Anything Goes" is a classic of the musical theatre. As a classically trained actor, I know that when I approach a character from a Shakespeare play that has been done many thousands of times over the past 400 years, it is my duty not only to give the audience some of the qualities they expect from the character and his story, but also to infuse him with new life and a sense of freshness. This is part of the fun of being an interpretive artist. The material has stood the test of time, so how do I bring myself and my own imagination into play in bringing the character to life? My hope is that while the audience gets to enjoy the familiar tunes and outrageous gags of this iconic musical, they may also make some discoveries they didn't expect along the way. We have just over two more weeks to romp about on the S.S. American. More to come!
Posted by Jamie at 1:44 PM No comments: