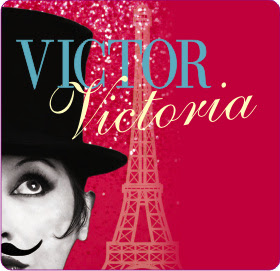 There are some movies that become not just favorites, but ingrained parts of my life. "Victor/Victoria" is one such. When the film was released I was a freshman in college, and I saw it for the first time with my Mom. We fell in love instantly with the movie and when the credits rolled at the end we just stayed in our seats and watched it through again. It's a perfect thing, a gleaming, multi-faceted gem. Meticulously and joyously directed by Blake Edwards, it features Julie Andrews, James Garner, Leslie Ann Warren and Robert Preston in some of the best performances of their careers. Of course, you know the story: a down-on-her-luck soprano in the Paris winter of 1934 is adopted by a struggling cabaret singer who has the brilliant idea of passing her off as Europe's greatest female impersonator. Against a background of luscious art deco sets and costumes, this romantic comedy sizzles and tickles... a truly satisfying experience. By now I know every line and every frame of the film. Michael Hamilton, the director of our production of the stage musical here at Stages St. Louis, also has a special connection to the movie, which resonated for him as much as it did for me back in 1982, with its message of acceptance and freedom of sexuality and gender. Michael intends to not only put on a glitzy and entertaining show; he also intends to make sure that the heart of the story is there too.

Blake Edwards always intended to make a stage musical of his film but it took many years before it made its Broadway debut in the mid-90s.

By then, unfortunately, Julie Andrews' formidable singing powers were beginning to wane, and it was this show that caused the vocal damage which resulted in the botched throat surgery which robbed Ms. Andrews, and all of us, of her glorious voice. The show was plagued with problems... Henry Mancini passed away before completing the score, which was brought to the finish line by Frank Wildhorn, with somewhat mixed results... the press was rather hard on the show, and the Tony Awards gave it only one nod--a sentimental nomination for Julie Andrews, which she, in solidarity with a production she felt deserved better recognition, declined. Nevertheless, I was there, with my Mom, at opening night, and I can tell you that the charm of the story, the wit of Blake Edwards' direction, and the grace and style of Ms. Andrews all made for a lovely evening in the theatre. I am delighted to be a part of a revival of the show which promises to be gorgeously mounted and full of heart and high comedy.

My history with the score of "Victor/Victoria" goes even further. Back in 2002, toward the end of my career as a cabaret performer, I created a revue of the songs of Leslie Bricusse which borrowed its title from the central ballad of "Victor/Victoria," "Crazy World." 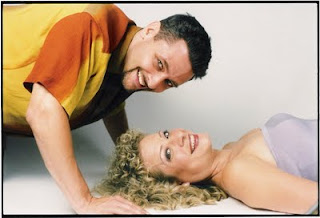 Awarded the Manhattan Association of Cabarets and Clubs MAC Award for Revue of the Year, the show, which starred lovely singer Goldie Dver and me, featured songs from all of Bricusse's scores, and we had great fun plucking some of the best songs from "Victor/Victoria" out of context and using them in innovative ways; songs like "Gay Paree," "Paris By Night," "Paris Makes Me Horny," and "Living in the Shadows." It's been really gratifying to express my love of this material, and being a part of this production of the musical is a rare and wonderful opportunity. We began rehearsals this week and I can tell you we have an energetic and gifted cast, and the design plans for the production are ambitious and beautiful. It's gonna be good!
Posted by Jamie at 9:00 PM 1 comment: