JAMES BEAMAN CONTINUES THROUGH MARCH 27 AS LORD WYE IN THE CONCERT STAGING OF "THEODORE AND CO." WITH MUSICALS TONIGHT!

NEXT UP: JAMES WILL PLAY SIR EVELYN OAKLEIGH IN COLE PORTER'S CLASSIC "ANYTHING GOES" AT MERRY-GO-ROUND PLAYHOUSE IN AUBURN, N.Y. JUNE 1 THROUGH JUNE 22.

LATER THIS SUMMER, BEAMAN WILL GO TO STAGES ST. LOUIS TO PLAY HENRI LABISSE IN "VICTOR/VICTORIA" SEPTEMBER 9 THROUGH OCTOBER 9.

Summer is an important time for performers, especially those of us who do musical theatre. It is high season for reputable companies who produce full slates of musicals, which means lots of jobs, and the months of February and March are hectic and jam packed with auditions of all sorts. As of this writing, I am fortunate to have lined up a couple terrific roles to play, and am still out there hustling to fill the remaining slots in my summer season. While one never knows how things might change as the weeks progress, as of now I can announce two delightful opportunities that are on my horizon.

While I was performing "The Road to Qatar!" at the York, I was fortunate to meet the producer of Merry-Go-Round Playhouse, a reputable summer theatre located in the Finger Lakes district of upstate New York. My work impressed him and I was delighted to audition for the role of Sir Evelyn in "Anything Goes." 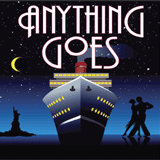 Evelyn is a 'veddy, veddy British' chap who is making a transatlantic trip to marry his American fiancee when he finds himself in love with the brassy Reno Sweeney. It's a delightful part in a true classic of the American musical theatre (which is currently having a revival on Broadway). I am thrilled also to be doing the show with my "Road to Qatar" cast mate Bruce Warren, who will be playing the rascally Moonface Martin. On a humorous side note: I did play Sir Evelyn once before... in 7th grade in the junior high school musical!! It will be nice to play it again...

The middle of the summer is still uncertain but at the end of August I am slated to go out to Stages St. Louis to perform in the last offering of their 25th Anniversary Season. 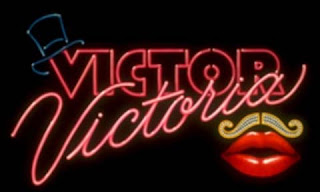 I had the pleasure of playing the wonderful role of Jerry in the musical version of "Some Like It Hot," "Sugar," back in 1997 at Stages, and I am tickled to be returning to do the stage version of one of my all time favorite movies, "Victor/Victoria." I have a long history with this movie, having seen it for the first time in my college years. It has since remained one of my top ten favorite films--a polished gem with some of the best performances ever given by its stars Julie Andrews, Robert Preston, James Garner and Leslie Ann Warren. When it was announced as a Broadway musical in the 90s, I immediately snatched up opening night tickets and took my Mom (who is equally as obsessed with the movie)--a truly memorable night and the only time I have seen the great Julie Andrews on stage. In the Stages production, I will get to play the oily bad guy of the piece, Henri Labisse, owner of the sketchy gay nightclub Chez Lui. Labisse is a comic character turn in the great tradition of the films of Blake Edwards, the creator of "Victor/Victoria." He is a nasty little man who attempts to expose the toast of Paris, 'Victor,' a drag performer who is in reality a woman pretending to be a man pretending to be a woman. The character has elements of both Inspector Clouseau of the "Pink Panther" films and his exasperated boss, Chief Inspector Dreyfus. I adore playing villains, and this one will be a real treat, with a thick French accent to boot. 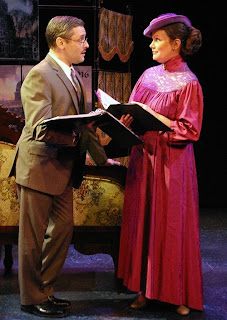 As of this writing, I am finishing up my brief stint as the randy Lord Wye in the Musicals Tonight! concert staging of Ivor Novello's obscure "Theodore and Co.". It has been such fun playing this absurd little English musical from 1916 and I have been fortunate to work with an endlessly fun group of performers on this one (I am pictured here with my vivacious counterpart, Amy Arbizanni, as Mrs. Blissett). The audiences that come to these concert readings, presented by the indefatigable Mel Miller, are populated by people who are passionate about discovering lost musical theatre gems, and we have enjoyed introducing them to this spirited romp through World War I era London. If you haven't seen it yet, you have until March 27 to get there and check it out!

New York continues to be cold and wet, but spring is on the way! I hope that your summer plans are taking shape and that you will have as much fun as it looks like I am going to have.
Posted by Jamie at 9:32 AM No comments: