Rave On! "Buddy" Rocks The Gateway! 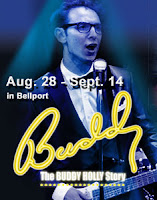 I never really knew anything about this show until I began working on it a couple weeks ago, but what I have learned is that audiences LOVE "Buddy!"  The story is one of a true American original and music pioneer, and the show is chock full of classic rock and roll performances, brought to the stage by actors who are also superb musicians.  It's no wonder the piece breaks box office records wherever it plays, like in Ogunquit, where we will be performing in October, and where the show exceeded sales for every production in the theatre's 80-year history last season.

I am delighting in my dual roles of good ol' boy country DJ 'Hi-Pockets' Duncan, and the MC for the climactic Clear Lake concert at the end of the show.  The MC is a mashup of Charles Nelson Reilly and Paul Lynde, a snarky queen with a red pompadour and a repertoire of groaner jokes.  To have such contrasts to play in one evening is such fun, and these multi-character 'tracks' are something I have become a bit of an expert at executing.

We have two more weeks of shows here at Gateway, in lovely Bellport, NY.  For more information, visit the Gateway website.  After a two week hiatus, we will open October 2 at Ogunquit Playhouse, where I have not performed since starring in "La Cage Aux Folles" in 2007.  To return to this fabulous theatre in beautiful Maine in a production that has already had such a huge success there is something I eagerly look forward to!