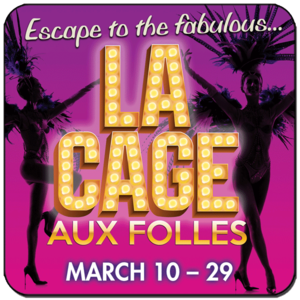 La Cage Aux Folles has worked a sort of magic in my life--twice--setting me on new paths of experience and professional advancement.  It's a story of family, of love, of personal authenticity, decorated with sequins and infused with heart.

The first time I stepped into t-straps and entered the glittering world of La Cage was in 1990.  I did a small, low budget production at a long defunct theatre in Framingham, MA, which was attended by two wonderful producers, Armand Marchand and George Charbonneau, who were about to launch the New Bedford Festival Theatre at the grand old Zeiterion. La Cage Aux Folles would be their inaugural production, with a full orchestra and the Broadway costumes and sets.  Armand and George swept me up to reprise my role as the notorious and dangerous Cagelle (with an attitude), Mercedes.

It was in New Bedford that I met the man who would become my partner for 16 years.  My one and only ever "showmance."  Damien played Francis, the stage manager, in La Cage and during those brief three weeks of the show, we fell in love, and moved in together not long after.  This musical farce of drag and family drama had changed the course of my life.

Ironically, it was right after the end of my relationship with Damien that La Cage came unexpectedly back into my world.  The year after our breakup in 2006, I spent a season performing Shakespeare's "War of the Roses" plays at Alabama Shakespeare Festival.  Five months of sword wielding and verse speaking.  Right after that, I joined my friends Marcus Kyd and Lise Bruneau in DC to be part of their fledgling company, Taffety Punk's, first ever Bootleg Shakespeare production: Cymbeline. I played the tormented lover, Posthumus Leonatus, and returned to New York from the one day marathon of Bootleg, flushed with creative joy and hoarse as heck from the vocal challenge of Posthumus's ranting!

The evening I got back I got a call from casting director Stuart Howard (who cast the original Broadway production of La Cage) telling me that Ogunquit Playhouse was doing the show and that they had lost the name actor who was to play the lead role of Albin.  They started rehearsal in less than a week and had been unable to find a replacement.  He insisted I go and audition. With absolutely no clue if I'd be able to sing the show's anthem, "I Am What I Am," after my vocal exertions in the Shakespeare, I nevertheless showed up the next morning at 9AM.  I somehow found the voice to sing the song, and director BT McNicholl and choreographer Barry McNabb hired me on the spot. Five days later, I plunged into rehearsals with my co-star, handsome heartthrob Maxwell Caulfield.

It'd take much more than a blog post to relate to you the many wonders of that production; the brilliant folks I worked with on it.  Ogunquit's La Cage brought me lasting friendships, and challenged me to step into my own as a star musical theatre performer.  Albin is the male equivalent of Jerry Herman's great leading lady parts like Dolly Levi and Auntie Mame. It takes enormous confidence, skill and endurance to deliver Albin's journey and that of his dazzling alter ego, ZaZa.  Playing the part transformed the entire way I viewed myself as a performer.

And... as fate would have it, BT McNicholl went immediately from our production to become Mike Nichols' assistant director on the Tony-Winning Best Musical Spamalot.  BT helped me get in front of the show's casting director, Tara Rubin, and, come that fall, I was cast as Sir Robin in the First National Tour.  And if you have been following this blog you know just how monumental that opportunity was for me and my career.

Well, here we are, 12 years later, and I have been invited by wonderful Riverside Theatre in Vero Beach, FL--one of my favorite theatres--to lead their production of La Cage Aux Folles as Albin in 2020!  I am thrilled to take on this glittering and fabulous role again, and to be directed by cherished collaborator DJ Salisbury.  With the recent passing of the great Jerry Herman, it is truly an honor to begin the '20s performing this life affirming classic.  Will this new La Cage lead to yet another magical breakthrough in my love life or career?  Who knows.  All I feel right now is excitement!-- and gratitude for having this opportunity before me as the new year dawns. Truly, playing Albin IS the best of times.
La Cage Aux Folles plays March 10-29 at beautiful Riverside Theatre.
Posted by Jamie at 7:50 AM No comments: