We are halfway through our eight day (gasp) rehearsal process for Disney's "Beauty and the Beast" here at Music Theatre Wichita.  "Nice Work If You Can Get It," which closed just a few days ago, was a great success, and I loved returning to my role of Cookie McGee; but of necessity, my preparation for Cogsworth had to take something of a back seat as we roared through the Roaring Twenties for delighted audiences that packed the Century II here in Wichita.  The nature of the beast (sorry, couldn't resist) that is this summer stock schedule, I find, is that as an actor I am finding things as I go along, especially as my Cogsworth works off of all the other characters in the piece.  However, I did do some preparation work when I found out I would be playing this goofy, veddy veddy British head of the household.  As usual, I stole ideas from the best!


Cogsworth is to the Beast's castle what Mr. Carson is to Downton Abbey, for example.  There is something of an upstairs/downstairs hierarchy in "Beauty and the Beast," except that the staff of this castle are becoming strange household objects.  Cogsworth shares Mr. Carson's fussiness and insistence on decorum; but like Carson, he is, at heart, a sentimental softie.  I have borrowed some of these qualities from Jim Carter's wonderful portrayal.


The servants in the Beast's castle are morphing into objects that are reflections of their personas and their roles in the house: Lumiere, the flamboyant ladies' man, is becoming a candelabra; Mrs. Potts--warm, nurturing, also very British--is becoming a teapot. Cogsworth, who is all about precision and order, is becoming a mantle clock--one that is extremely tightly wound.  Learning the role, I've been greatly inspired by "Star Wars'" gleaming gold droid, C-3PO.  Like Cogsworth, he is easily flustered, absurdly logical and devoted to his master.  I also found inspiration in the work of C-3PO voice actor Anthony Daniels.

The third influence I've drawn upon--and this should be no surprise to those who know me as a devout classic cinephile--is the ultimate British butler of 1930s Hollywood, actor Eric Blore.  You might remember his fabulous performances in Astaire/Rogers pictures like "Shall We Dance?" and "Top Hat."  His 'gentleman's gentleman' characters were always a little feisty, easily riled, and spoke with an exaggerated accent not even the toffiest toff would adopt.  He's been a great inspiration for Cogsworth.  Take a look at this scene for a sample of Blore's gifts, as he banters with another great classic character actor, Edward Everett Horton.


I admit that I am still finding my Cogsworth and I feel no little pressure to do justice to this now classic Disney character.  This is the 25th Anniversary of the animated film and the MTW production is a lavish, extravagant and heartfelt version, completely designed and crafted here at the theatre and directed with the elegant touch of Artistic Director Wayne Bryan.  I've been saying all week, as I have found myself curiously moved and excited by the show, that Disney knows how to get you!  As fantastical as the piece is, we have to bring complete sincerity and high stakes to the story and our characters.  This is a great challenge, especially when wearing, as I will, a large, stiff, cartoonish but very beautiful clock costume designed by Tiia Torchia.

The seven performance run is nearly sold out as of this writing.  It is going to be one thrilling production--playing to an over 2000 member audience every show amidst a cast of over 60 performers, accompanied by a 26 piece orchestra.  This 'tale as old as time' will feel new, fresh and more magical than ever! 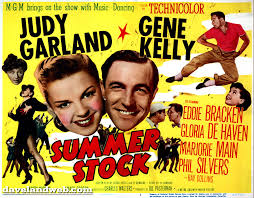 "Back in the day," as they say, young theatre artists from actors, to directors, to designers like my Dad, Donald Beaman, cut their professional teeth on the old summer stock circuit.  The term 'stock' referred to the scenery, props and costumes that theaters would recycle and rework for each production, thus enabling them to save money and produce a different play every week to entertain their audiences, primarily comprised of East Coast urbanites vacationing at their summer getaways.


Some of these original summer stock theaters are still in operation, like Ogunquit Playhouse and the Cape Playhouse--and I have had the honor to work at both of these!  When the summer stock circuit was established, young performers paid for the summer apprenticeship where they would learn their craft alongside big stars of Broadway and Hollywood, who happily came out to places like Maine and the Catskills to escape the Manhattan heat and often, un-air conditioned Broadway theaters.

The 'show a week' paradigm of summer stock is still thriving in big professional summer theaters around the U.S., the most prominent being the MUNY in St. Louis, the Sacramento Music Circus, and the place I am fortunate to be in right now: Music Theatre of Wichita.  All of these theaters offer apprenticeship and internship programs for young artists, continuing the legacy of summer theatre as a vital training opportunity and a bridge into the business.  MTW operates under the URTA (University Resident Theatre Association) contract, and assembles, each season, a core company of talented college performers and recent grads, who get to do five shows in ten weeks with top notch directors, choreographers, and visiting actors like myself.  These young triple threats are the cream of their colleges and conservatories and the talent is just--WOW.

But the days of slapping up some flats and reworking some old stock costumes are a thing of the past, and the old barns that used to house summer theaters have given way to state of the art facilities, like the Century II Center here in Wichita.   Here at MTW, shows are presented in a 2,100 seat concert hall, with lavish sets and costumes (some from Broadway and tour productions, some made right here on the premises) and with an orchestra of upwards of 18 pieces!  Broadway productions don't have orchestras of this size anymore, so to be able to present a big musical with that kind of lavish orchestration is an incredible opportunity. This ain't your grandpa's summer stock!

What remains the same as of old, however,  is the breakneck speed of the summer stock schedule.  From first rehearsal to opening night of "Nice Work If You Can Get It" we have a whopping eight days of rehearsal and tech. Nothing tests your mettle quite as profoundly as having to learn an entire role in a complex musical in a week, and then deliver just seven performances before moving on to the next show.  Larry Raben, our director, and Peggy Hickey, our choreographer, are doing a superb job of recreating our production from the Gateway and Ogunquit Playhouse of last summer, for which we had three weeks to rehearse and two multi-week runs to refine.  Seems like utter luxury as we power through this process!

I'm lucky on this first show because I am recreating my role from last year, so I am ahead of the curve!  I am in awe of our talented principals and energetic young ensemble who are just nailing this busy Gershwin musical with total finesse.  I will get a taste of the real MTW experience when I follow up this production one week later as Cogsworth in "Beauty and the Beast,"  a show I have never done in a spectacular physical production.  Studying one part while rehearsing at hyper speed on the other is every bit the challenge you think it is!  But as we keep saying, with a smile and a shrug, "THAT'S SUMMER STOCK!"

If you are in the Wichita area between June 8 and July 3, come see me in one of these glittering shows.  Visit the theatre's website for more information.
Posted by Jamie at 10:05 AM 3 comments: