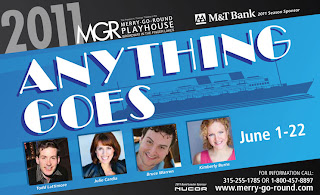 Summer stock is one of the enduring institutions of show business. Anywhere you find sun and water and vacation homes in America, you might just find a little hard working theatre presenting a breakneck season of light entertainment, mostly musical comedies, for your delectation. It has been a few years since I have done true stock, which usually these days refers to the seemingly impossible task of mounting an elaborate musical in less than two weeks, sometimes even in one, thus allowing the venue to pack a full slate of shows into the all too brief summer season. Merry Go Round Playhouse has been a part of the summer landscape in the lovely Finger Lakes district of upstate New York since the early 1970s, and has been run by Artistic Director Ed Sayles for 30 years. The theatre itself is housed in an old building that once housed a carousel, nestled in a bucolic setting in a local public park. Having endured and evolved over the years, and with major recent upgrades to the theatre facility, Merry Go Round is well established, and continues to grow under Ed's direction. The theatre is creating a new festival of musical theatre which will be performed in four venues in the region, presenting and developing new shows, in addition to their mainstage series. Ed is directing our opening production of "Anything Goes" and it is clear that this man has great affection for, and vast knowledge of, the tradition of music theatre.

"Anything Goes," which is currently enjoying a splendid Broadway revival, is perhaps Cole Porter's most beloved and enduring musical (with "Kiss Me, Kate" a close second). 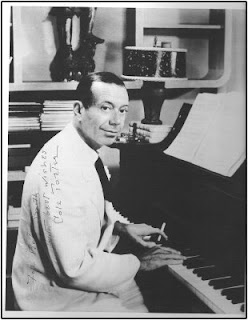 A bubble of a show, it follows the hijinks of a group of vivid characters as they make their way across the pond from New York to London on an ocean liner. The show is a feast of Porter classics including "I Get a Kick Out Of You," "It's Delovely," "Easy To Love," and "Blow, Gabriel, Blow." In short, it is a delicious little gem that audiences just love. Our cast is made up of seasoned veterans and an ensemble of young performers either still in college or just out of it--summer stock has always been a training ground and a starting place for talented kids and Merry Go Round offers that in spades. I have the pleasure of playing the quintessential dorky Englishman, Lord Evelyn Oakleigh, who is fascinated by all things American and who is continuously attempting to pepper his conversation with American slang, and getting it hopelessly wrong! He ends up marrying the brassy nightclub chanteuse Reno Sweeney, a role created for the legendary Ethel Merman, and here being served up with style and sass by the wondrous Julie Cardia. I could not ask for a more delightful leading lady.

I will be blogging throughout my stay here in Auburn, and will of course offer photos and reviews as they become available. Meantime, if you find yourself in the Syracuse/Ithaca/Finger Lakes region, come on over and set sail with us and "Anything Goes!"
Posted by Jamie at 8:02 AM No comments: