"MAME" AT GOODSPEED MUSICALS IS IN PERFORMANCE NOW THROUGH JULY 7! REVIEWS TO COME! 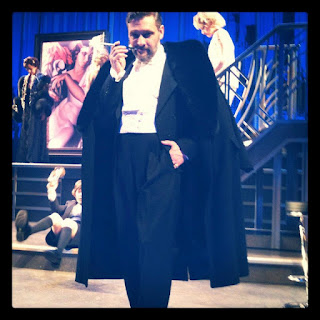 "Mame" is launched and we are all basking in the rapturous response of our audiences. Everyone involved with the show is delighted at the way folks are embracing the story we are telling and especially the way they are falling in love with the Auntie Mame of our fearless and glamorous leader, Louise Pitre. 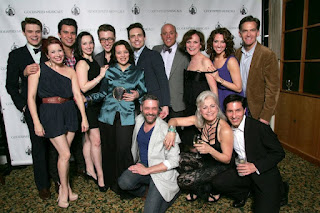 Our opening night party was great fun, with much festivity and photo ops. Everyone, from staff to crew to creative team to performers, enjoyed a night of celebration and a few well earned cocktails.

I am delighted that my 'best girl,' my Mom, is coming out to see the show this weekend. She's my biggest fan, and was always Auntie Mame to me-- encouraging me to dream big, be uniquely myself, and take a big bite outta life! Glad she can see me strut in my gorgeous Gregg Barnes costumes.

We are six weeks into our time here at Goodspeed, with ten more to go. I am filling my time with writing projects, teaching Pilates to the cast, engaging in some great education outreach with the Goodspeed Education Department, and of course keeping the hustle going back in New York for the next gig. That process of drumming up work never stops! As of now, the next thing for me will be a return to DC for the annual Bootleg Shakespeare presentation at the Folger Theatre with Taffety Punk Theatre Company. This year it is "Hamlet: The Bad Quarto" which should be a blast. Shakespeare's play was published in a quarto version that has stymied scholars for centuries-- it contains so many errors and discrepancies that many believe it might have been a pirated version of the actual play we all know. But it reveals some interesting things about the piece and will be fun to explore. I am slated to play the First Player, and will get to have fun with the "Mousetrap" play within a play sequence.

The weather out here in the Connecticut River Valley is schizophrenic to say the least, with wild extremes in temperature, but the lush foliage and bright blossoms everywhere herald the Spring and the promise of warmer days to come!
Posted by Jamie at 10:10 AM No comments:

It Takes a Village 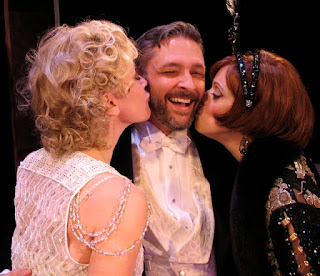 with Louise Pitre as Mame and Judy Blazer as Vera

I am excited to begin performances of "Mame" and of course will report on the opening of our glittering, fabulous production after our first weekend of previews. If you plan to come and see the show, I recommend buying your tickets right away-- we are selling fast! I thought I would take a moment here and sing the praises of Goodspeed Musicals' new actor housing.

One of my first jobs out of college was a season of summer stock at a non union theatre in upstate New York-- a dilapidated old venue literally in the middle of a cornfield called Fort Salem Theatre. My Mom drove me from Boston and I arrived at the theatre, excited to do my first full season of musicals. I was directed to the house where I would spend the next three months of my life, and was shocked and appalled to see the ratty, filthy old place that awaited. In my shared room, the floors had buckled, the beds were mattresses on the floor, one window had been shattered and glass lay everywhere, and the place smelled of the mold that had gathered under the damp, peeling wallpaper. It was, in short, a hovel-- one I would not wish on a squatter. But being non-union, there was no recourse to correct the problem, and since I was young and stupid and had signed a contract, I remained. By mid-season, the upper floors of the house had been condemned by the local building inspector, and all of us crammed into the remaining bedrooms on the ground floor, and were forced to share one mildewed bathroom amongst eight performers. This is an extreme story, but it illustrates the plight of the itinerant actor, who must uproot himself continually and take up residence temporarily at each theatre where he works.

As mentioned in previous posts, this is my third show at Goodspeed, but this time the experience has been immeasurably enhanced by the amazing new actor housing that the company has created. In the past, actors likened their time here to a sort of summer camp, referring to it fondly as "Camp Goodspeed." This was partially due to the homey feeling of quaint East Haddam and the surrounding Connecticut River Valley; but it also had to do with the kind of housing the theatre provided. Actors shared old 19th century houses that offered few amenities, and it was a sort of given that we all had to get into the spirit of things and make the best of our communal arrangements if we were to enjoy our three to four month sojourns here at Goodspeed. And we did! Good times were had in those well worn old houses. 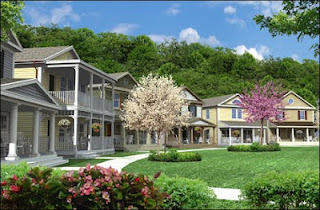 But Goodspeed, a place where theatre is done according to the highest possible standards, wanted better for its artists and after years of planning, the company built 17 new artists' houses. The Artists Village initiative represented the largest capital project in Goodspeed history. In total, the project cost $5.5 million, $2.5 million of which was provided through a grant from the Connecticut Department of Economic and Community Development and the remainder through private donations. Over 120 jobs were created as part of this project, most in the construction field and all within the state of Connecticut. It is estimated that the creation of Goodspeed’s Artists Village caused an economic impact of $17.5 million on the local economy.

Best of all, we artists get to enjoy wonderful, comfortable, state of the art accommodations in a green-friendly village of charming houses that fit perfectly into the historic landscape of beautiful East Haddam. I can't emphasize enough how greatly enhanced our work life is here at Goodspeed, waking in comfortable beds, cooking in well equipped, clean kitchens, and enjoying each other's company: sharing a glass of wine on the porch, or creating communal meals. We all feel so well taken care of, respected and nurtured by the theatre. How can we not do our best work? To learn more about the Artist's Village at Goodspeed, you can visit their website here.
Posted by Jamie at 9:41 AM No comments: 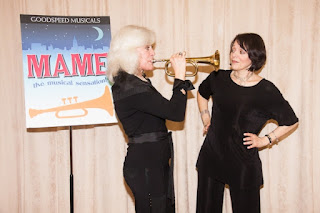 Most actors have a wish list. It's the roster of plum roles that they desire to play before their career has run its course. Whether we share this wish list with others or just keep it close to our hearts, it's there. And one of the bitter truths of the profession is that as one matures, some of those roles have to be crossed off the list; we move beyond them and they go unplayed. When I was an aspiring and precocious little boy, my dream was to play the title part in "Oliver!;" when that didn't happen, and I was a teenager, it was time to dream about The Artful Dodger. That didn't happen either. Now, it's the role of all roles in that show, Fagin, that I hanker after. I often tell friends that the best thing about being a character actor is that your best years are always in front of you!

Knowing this truth about the actor's journey, I can understand the intense desire our leading lady, Louise Pitre, has had for years to play Auntie Mame. 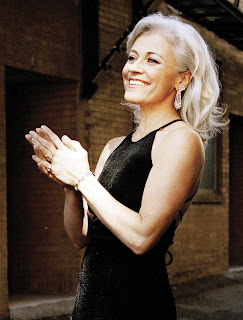 This passion for the role inspires the great joy and abandon that she is bringing to the part, and her enthusiasm is infectious--truly, she leads us all with a feeling of giddy fun. Her Mame is unique; rather than an arch, flamboyant performance, Louise is giving the role a free wheeling, fresh and genuine interpretation, bringing a femininity and natural quality to this traditionally eccentric character. It's disarming and it works. I didn't know Louise prior to this production, and all I knew of her career was that she originated the role of Donna in "Mamma Mia!" and was nominated for a Tony Award for her performance. But this is only one of her many accomplishments. 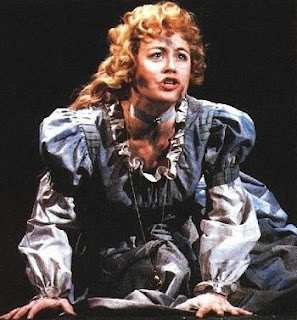 French Canadian by birth, Louise has performed the role of Fantine in "Les Miserables" in English and in French in Canada and in Paris, and has played the iconic French chanteuse, Edith Piaf. She has been nominated for three Dora Mavor Moore Awards for her work in her home country. She has recorded several albums and is an acclaimed concert performer. I would call Louise an 'athlete.' She is clearly a type-A personality, a hard worker and a highly disciplined performer, as evinced by her taut, athletic frame (Louise is a wonderful dancer) and the concentration and dedication she brings into the rehearsal studio. You can tell she is having the time of her life playing this dream role! Star vehicles like these do not come along every day, and "Mame" offers one of the finest star turns an actress could have-- the glittering central role of an extravagant musical comedy, complete with a glamour wardrobe of 17 different looks.

One of the gifts of my recent career has been the chance to work with performers like Louise, who have paid their dues and have refined their craft to the highest level. And sometimes I get to work with actors who have truly inspired me as I have come up as a performer. 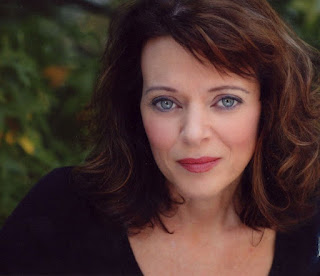 How delighted I was to learn I would have the chance to work with, and get to know, the fabulous Judith Blazer. We met in the hallway outside the studio where "Mame" auditions were being held and I just had to approach and tell her how much I admire her work. Judy could not have been more gracious and down to earth. She is a genuine, warm and incredibly funny lady. The first time I saw her was as the doomed Caroline Neville in "Titanic" on Broadway, and I will never forget her luminous presence, fantastic voice, and who can escape those big, soulful eyes of hers? Her career has been extraordinary, and one of her first professional gigs was right here at Goodspeed, in the title role of "The Bloomer Girl." She has starred on Broadway, in daytime drama, as a major concert performer, and opera artiste. She has worked with some of the best in the business: Neil Simon, Michael John LaChiusa, Michael Tilson Thomas, and the legendary Hal Prince, with whom she worked as "Brecht's Woman" in the Broadway show "Love Musik." 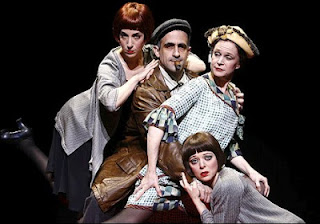 Judy is an accomplished woman who speaks several languages fluently, is a masterful musician, teacher and founder of a company and school in Ohio. She is, in short, the real deal, and the kind of performer that makes you a better performer just observing her work and playing along with her. I also just adore talking with her, hearing her amazing show business stories and sharing a laugh. She is playing the outrageous, boozy stage star Vera Charles with incredible comic mastery and her rapport with Louise Pitre makes their "bosom buddy" relationship come to delectable life. It is something to behold.

How fortunate am I to be playing Woolsey, who is the close chum of both Vera and Mame and to get to do all my scenes with these two powerhouse actresses?? Truly, this is a gift of an experience I do not take for granted.
Posted by Jamie at 10:01 AM No comments: