"Victor/Victoria Is a Hit! 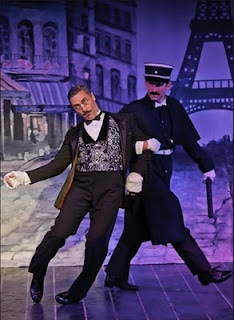 "THE ROAD TO QATAR!" ORIGINAL CAST ALBUM NOW AVAILABLE AT ITUNES!
So, it's official. Audience and critics alike are enjoying our production of "Victor/Victoria" at Stages St. Louis:
It's all wrapped up like a tune-filled souffle that's light and delicious and completely engaging and enjoyable. ~Broadway World
We have settled in for the few remaining weeks of our run here, and everyone at Stages is delighted with the way our production is bringing their 25th Anniversary Season to a glittering close. I am having fun with my extended cameo as Henri Labisse, and am scanning the horizon for the next performing opportunity. St. Louis is graced by several top notch professional theatres. Along with Stages, there is the Rep Theatre of St. Louis, which produces a full season of nationally recognized plays and musicals, including new works which have gone on to Broadway; and every summer, Forest Park comes to life with the Shakespeare Festival of St. Louis, performing on a massive stage outdoors in a beautiful natural bowl for thousands of spectators. 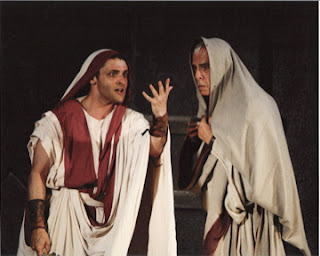 I had the great pleasure of playing Casca in "Julius Caesar" in 2006 at the festival and am looking forward to auditioning for their 2012 offering, "Othello." These theatres have been very welcoming and I have had the pleasure of meeting members of their artistic staffs and sharing my work with them. I look forward to returning to St. Louis very soon!
Posted by Jamie at 6:34 PM 1 comment: 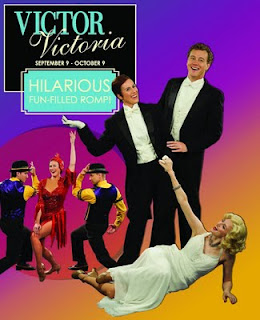 We are launching into tech week here in St. Louis as we prepare to open Stages' ambitious and glitzy production of "Victor/Victoria," the jewel in the crown of their 25th Anniversary season. I must say, the rehearsal process has been a great pleasure; director Michael Hamilton's meticulous approach has yielded a show that already has polish and great style. Adding the costumes, lights, scenery and other elements will take us all to that next level. They have pulled out all the stops at the theatre to make this a lavish and opulent production, stretching the limits of the intimate space to the maximum to create the art deco world of 1934 Paris. For a sneak peek at rehearsals and a look at some of the designs, visit the Stages St. Louis website and click on the video in the lower right corner of the main page.

I am greatly enjoying my role as the conniving weasel, Henri Labisse. Inspired by the comic masterpieces of creator Blake Edwards, I am doing more than a little homage to Peter Sellers' Inspector Clouseau, with a French accent thicker than gruyere cheese! Labisse gets his comeuppance for trying to foil the plans of Victoria and her fairy godfather Toddy by getting completely beat up during the course of the show. By the time the finale rolls around, I have two bandaged hands, a broken nose, a limp, and a head bandage. Being the one genuinely sour note in a show full of sweetness and glamour is a real treat and I'm having lots of fun. In case you don't remember Labisse from the film of "Victor/Victoria," here is a link to the scene in which Julie Andrews auditions for him at Chez Lui. Labisse is played here by veteran character actor and Blake Edwards favorite Peter Arne.

Reviews and production photos to come! "Victor/Victoria," which is already selling like mad, runs through October 9.
Posted by Jamie at 11:56 AM No comments: