FINAL WEEK OF "MAME" AT GOODSPEED MUSICALS!
NEXT UP:  "HAMLET: THE BAD QUARTO" AT FOLGER THEATRE AUGUST 6! 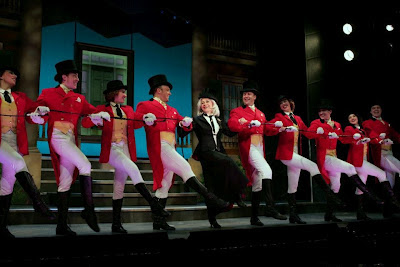 And so, we head into our final performances of "Mame."  What a trip it has been!  I want to express my gratitude to Goodspeed for bringing me back into the fold for my third production here in as many seasons. What an honor!  "Mame" has been a jazzy, glittering, hilarious romp and I have great admiration for all my fellow actors and the many hardworking people who make things tick here at this jewel of a theatre.  I have made a few new incredible friends and have had the pleasure of watching our leading lady, Louise Pitre, live out a dream in playing Auntie Mame.  Her discipline and drive have been a marvel, never missing a performance and performing this marathon role, complete with 17 costume changes, all of them quick, with enthusiasm and energy.  Brava!


A post-mortem on this production is premature, but I thought I might reflect a little on what I have learned about this classic show by doing it, and offer some acerbic commentary, just for fun.  After all, it's my blog!

WHAT I HAVE LEARNED ABOUT "MAME:"